It has been 22 years since the Administrative Adjudication of Road Traffic Offences (AARTO) Act 46 of 1998 was approved by Parliament. The aim is that it will eventually replace the Criminal Procedure Act (CPA) and bring uniformity to how fines and vehicle licensing are managed across the country. How will this affect fleet management?

Jacqui Parkin, executive of operations and human capital at Eqstra Fleet Management, explains that, at its core, AARTO aims to apply stricter laws on traffic offenders and provide a more efficient way of tracking offences and fines to reduce the high number of accidents on our roads.

“At first glance, the AARTO system might sound like a lot of extra admin for fleet managers, but it will also allow fleet owners to keep better track of their company infringement records, as well as that of their drivers,” she writes in her piece “AARTO vs normal fines”.

She adds that one of the biggest changes is that, under AARTO, companies – not only drivers – will be held liable for infringements.

“An article published on Mining Safety explains it well: ‘One of the key differences between the CPA traffic management system and AARTO is that previously there was no penalty for owners and operators, other than paying fines on behalf of drivers. Now, the system allows for the suspension and cancellation of drivers’ licences as well as professional driving permits, vehicle license discs and the operator’s card. This means that mismanaging traffic infringements, like ignoring fines and notices, can result in interruption of operations and loss of business. Also, under AARTO, fines can only be redirected once, so it is the operator’s responsibility to know exactly who is driving their vehicles and when.’”

Parkin adds that, for fleet managers, the biggest change with AARTO is that driving infringements can now affect the company directly, and not only via the drivers.

“To keep the fleet running efficiently, fleet owners and managers will need to focus on two key areas:

1. Fine management will have to become a core focus of the business. The most effective way of doing this is to partner with a reputable fleet management company, or to consult one of these companies to help you to set up your own AARTO management department.

2. Driver training will become even more crucial. Drivers need to know how the system will affect them personally in their daily jobs, and they also need to be trained on how to do their jobs and avoid infringements. They need to have a very clear understanding of the legislation and will require proactive training to help them operate in such a way that they don’t risk having points added to their driving record.”

Eugene Herbert, managing director of MasterDrive, adds that a proxy needs to be appointed who keeps track of drivers and subsequent fines. “While that proxy cannot be held personally responsible for the fines, it is an infringement to not keep track of drivers and reassign the fines to the correct driver,” he notes in the Bizcommunity piece: “AARTO for the owner vs driver”.

“Future and past employment contracts need to now also contain a clause that allows you to receive information on your employees’ infringements. If an employee’s license is suspended, as a result of fines obtained in their work as well personal capacity, yet they continue to drive for your company, the company can also be held responsible for this. These are just some of the considerations one needs to make with the introduction of AARTO.”

Herbert adds that if drivers tend to receive infringements frequently, now is the time to change their behaviour. “The consequences of bad driving behaviour are considerably more serious if it can result in the suspension of your driving licence, and consequently, your ability to earn an income.”

Derick de Vries, executive head of fleet management at Standard Bank, says that currently the onus is on companies to ensure that, in the event of an infringement, the offender is nominated to pay the fine. “However, it is common practice for companies to ignore this process and simply pay all their fines monthly using a legally responsible person or proxy.

“Under AARTO companies will not receive demerit points and instead will be afforded a notice period of 32 days to redirect any fines to the driver who transgressed. If they fail to do this, the company will receive increased fine amounts until the fine is paid. Failure to pay the fine will mean blocking any renewals, new registrations, deregistrations and notices of change of ownership on any of the company’s vehicles. Specific vehicles can also carry penalties and you will not be able to renew the vehicle licence for a specific period.”

He says that managing this process could prove cumbersome, which is why it is advisable to partner with experts such as Standard Bank’s Fleet Management team. “We have developed digitised systems that notify you immediately of traffic infringements and allow you to settle them before they are escalated. These tools will become integral to how any business that operates a fleet works in the future and will also allow you to redirect fines to the correct driver and take advantage of early payment discounts.”

While the timeline for the full implementation of AARTO is still not confirmed, it is already partially implemented in Gauteng. “Understanding how the legislation works and ensuring that you follow the correct process timeously and efficiently is the best way to ensure that your business is not interrupted because your vehicle fleet cannot use the road legally.”

Parkin notes that, at the end of the day, AARTO is designed to clamp down on irresponsible driving and to make sure those at fault are punished. “As a safety-conscious industry, many fleet managers support the cause to make our roads safer, but are still a little daunted by the amount of time and detailed management the new system will require. The best advice we can give is that you arm yourself with knowledge. Dig into the AARTO website for information, and consult with one or more fleet management companies to see what solutions they offer for your particular business. This is not something you want to keep brushing under the carpet, as it could have massive financial implications down the road.” 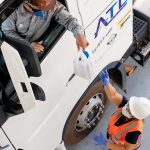 Prev Covid-19 in South America: many lessons learnt
Next Anarchy and control in commercial road transport 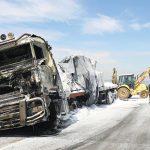