Transit gets an update

Transit gets an update

As well as implementing a facelift for its Transit Van and Transit Chassis Cab models, Ford has introduced a six-year/90 000-km service plan for the derivatives with a view to enhancing value for money factors and reducing running costs. WYNTER MURDOCH reports.

Ford South Africa has introduced an updated version of its capable load-hauler – the Transit Van. Distinguished by fresh new front-end styling that reflects Ford’s latest design language as seen on the latest Transit Custom, the heavy-duty model boasts new headlights, a restyled front bumper and a sleeker bonnet – all of which help to add modernity to the familiar, traditional Transit look.

A recent test of the medium-wheelbase variant proved its versatility. Used to haul sizeable and weighty cargo around Johannesburg, the van proved comfortable, easy to drive, practical and versatile. Notable for its wide-opening load doors, low load sills and a copious amount of space in the freight compartment, packing and unpacking the vehicle turned out to be stress free.

The model’s load volume is said to be about 10 m³, with a gross payload rated at 1 325 kg. According to a Ford spokesman, the cargo area is able to accommodate four standard Euro pallets, or carry items measuring up to three metres long.

In the case of the extended long-wheelbase (ELWB) derivative, cargo capacity increases to more than 15 m³, with the payload rated at 2 270 kg. Five Euro pallets can be carried, along with items up to 4,2 m in length.

Access to the cargo bay is facilitated through a sliding side door with an opening width of 1 300 mm and height of up to 1 600 mm, making it easy for forklift trucks to deposit freight at the front of the cargo compartment. Rear doors have an opening width of 1 783 mm and a height of up to 2 070 mm, which allows for even bulky items to be set down in the bay with little trouble.

Up to 12 ISO-compliant, floor-mounted, tie-down points are provided throughout the load compartment for securing packages, with standard illumination providing greater visibility when working inside the vehicle. Should more load capacity be required, the MWB Transit is capable of towing up to 2 800 kg with a braked trailer, while the larger capacity version can carry up to 3 500 kg.

Towing capabilities of Chassis Cab derivatives – which are also available in MWB and ELWB form – match those of their van counterparts, but they have higher gross payload ratings of 1 597 kg and 2 691 kg respectively.

Ford’s tried and tested 2,2-litre Duratorq turbodiesel engine powers all Transit models, delivering dependable performance and good fuel efficiency. Each of the MWB models in the line-up is powered by a 92 kW, 350 Nm version of the unit, which proves highly responsive whether in city traffic or on the freeway.

The higher-spec engine used for ELWB models boasts 114 kW and 385 Nm. All Transit variants are equipped with a six-speed manual transmission, with drive to the front wheels for the MWB, or to the dual rear wheels for the ELWB Transit.

According to a Ford spokesman, the cabin has been designed to promote comfort as well as practicality. Forward and side visibility from the driver’s seat is good, and large outside rear-view mirrors offer a clear view of what’s behind the vehicle. Useful optional features include parking sensors and a rear-view camera.

The driving position is good – the steering column adjustable for rake and reach – with clearly legible instrumentation and sizeable pedals contributing to the convenience factor. Smart stowage solutions are located throughout the interior, including a full-width overhead shelf and a large hidden compartment under the dual passenger seat.

Two 12-volt power sockets are provided, and can be used for charging or powering mobile devices. A Ford audio system is a standard feature, offering connectivity features which include Bluetooth, USB and Aux ports, voice control and steering wheel-mounted audio controls.

When it comes to safety, all Transit models are equipped with anti-lock brakes, an electronic stability program with traction control, electronic brakeforce distribution, emergency brake assist, hill-launch assist and rollover mitigation. A driver’s airbag is a standard feature, with a passenger airbag available as an option as part of a comfort package that also adds air-conditioning.

Vehicle and cargo security are provided by means of a perimeter alarm system, along with remote central locking with shielded power door deadlocks, configurable two-stage unlocking and drive-away locking functionality. 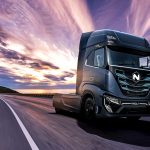 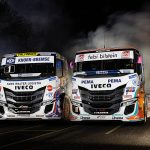